The rhythm and blues powerhouse, R&B Conspiracy, is a mix of funk, soul, and traditional blues with an edge. This dynamic seven-piece band features three hot female vocalists and plays all of your favourite songs from the ’60s to today, guaranteed to keep you grooving all night.  R&B – with a twist! 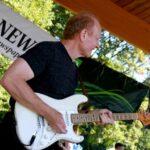 Michael Toth played in two professional local bands, the Handley Page Group and Steelback before embarking on a career as a high school music teacher at Sentinel Secondary in West Vancouver.  In his 6th year as music teacher, Michael decided to develop an R&B band class, wherein students could study and learn to play in the style of ’60’s Motown music. It was through this class that Michael connected with Deborah Carter, Samantha Godin, and Shannon Soper, and the idea of forming an R&B band with three vocalists emerged. Michael loves every chance to play with the R&B Conspiracy and to work with such fine musicians. 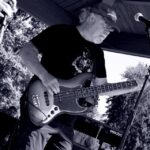 After playing rock in the ’80s with Bryan Adams and earning a gold record as part of Strange Advance (Capitol Records), Paul felt compelled to return to one of his early loves: Rhythm & Blues.  “Hooking up with these musicians and singers has been a long and wonderful ride – we’re like family.”  Paul is also known as one of Western Canada’s premier luthier/guitar technicians, having worked with the likes of Aerosmith and Sarah McLaughlin.

We are so fortunate to have Brian laying it down for us!  Always in the pocket, his grooves really keep us together.  Welcome to the band Brian!

As an established artist in Vancouver, Tom wears many hats; keyboardist, composer, arranger, producer, musical director, teacher, and actor. He can write, arrange, sing and play any style of music, and often does. He has released the albums “Everyday Love,” a collection of original spiritual songs, and “The Turning,” featuring original jazz.

Tom worked with Grammy winners Michael Buble, Jack Jones and producer Dave Pierce. He was featured vocalist and actor in the Showtime movie, “Reefer Madness” and was vocal coach to Will Ferrell in the movie “Elf”. 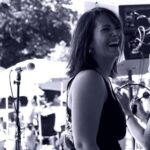 Similar to her R&B Conspiracy bandmate, Michael Toth, shaping young minds is elementary school teacher Shannon Soper’s passion.  Though when she lets her hair down and hits the stage…  think Van Halen’s “Hot for Teacher”!  Yes, Shannon’s second calling is singing with the R&B Conspiracy.  Her sexy tone, care-free attitude, and comfort on-stage will entice you to shake your tailfeathers every time you see the R&B Conspiracy perform.   Listen for Shannon singing background vocals on the albums of various local artists, as well as the voice of a number of radio commercial jingles.  Shannon’s vocal versatility, enthusiasm, and her love for her bandmates is part of what makes the R&B Conspiracy amaze, night after night.

Samantha Godin has an extensive hospitality management and Arts background as a graduate from Gastown Actors Studio. She is one of the founding members of the R&B Conspiracy and is known for her engaging performances and stage presence. She loves to connect and create chemistry with her incredible bandmates. Samantha has recorded many studio sessions including radio hit vocals at Vancouver’s famous Armory Studios, for Canadian country star Jessie Farrell‘s breakout album “Nothing Fancy” as well as local talent the Adam Woodall Band’s debut album “Silver Ring.” Samantha brings to the stage a sultry blend of all genres, highlighted by passion, playfulness, professionalism, and of course, a killer set of pipes. 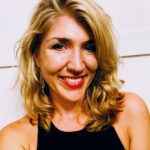 Deborah’s love of voice, singing and language is expressed in her speech-language pathologist by day, diva-rockstar by night persona. Since joining the R&B Conspiracy before she could legally visit bars, Deb has grown into a vocalist and entertainer who can belt it out with the best of them.  Soulful ballads like “Midnight Train to Georgia” and stratospheric vocal-showcase tunes like Aretha’s “Think”, and Adele’s “Rolling in the Deep” highlight  Deb’s wide vocal range, emotive delivery, and versatility.  Deb has moonlighted in other bands over the years, most recently playing guitar and singing with the up and coming local trio, 24 Strings.  The R&B Conspiracy family and their R&B rooted songs will always remain her first love. Nothing can beat the powerful perfectly blended harmonies and chemistry of the three long-time soul sisters who front the band. When the R&B Conspiracy are on stage, the energy is electrifying.  Deborah plans to keep giving her all to the band, and the audiences that love listening and dancing to the sweet sounds of the R&B Conspiracy.